In Burma you’ll find a minimum of one monastery per village. There is no escaping temples in this country, especially in Mrauk U and Bagan valleys -each spectacular in its own way.

We first headed to Mrauk U in Arakan (Rakhine) State. You may have heard about this area on the news because it’s home to the Rohingya minority, whose member have been denied their right to a Burmese citizenship and now suffer violences from the population.

None of these troubles were noticeable in peaceful Mrauk U, a little town laying nested at the foot of the Arakan mountains. This range isolates Rakhine from the rest of Myanmar, so prepare for a loooong bus journey to get there: 22 hours from Mandalay!

The bus ride took its toll on us but we quickly bounced back and indulged ourselves in a nice bungalow. For $30, in Mrauk U Palace Hotel, you get a big breakfast, clean towels every day, two windows with a nice light… And the unrivalled pleasure to slip into fresh sheets for a nap on arrival!

Regarding the food, the Happy Garden restaurant provides (relatively) varied meals in a nice setting. But our memory remains attached to the delicious taste of zucchini fritters bought on the street… Gilded at will, it was as crispy as it was fat! 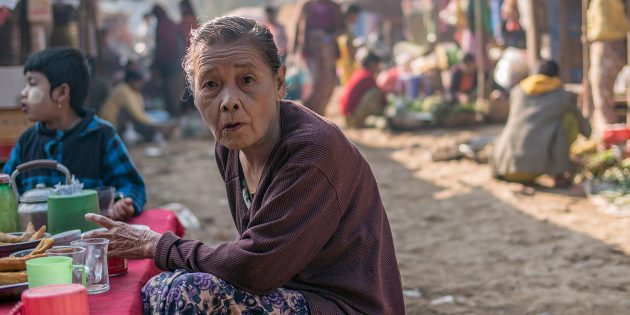 The market street, under the tender 7 AM sun, basks in a joyful atmosphere and offers a perfect breakfast or tea break when returning from a temple walk at dawn.

The entrance ticket to ​​Mrauk U’s archaeological area will cost you 5,000 kyats and remains valid for 1 week. 3 days are quite enough to visit, but we would’nt recommend to schedule any less: the bus ride is so tiring that you won’t feel like going back directly. And since it can get quite hot during the day, it might be nicer to visit the temples in short sessions of just 2 hours in the morning and 2 hours in the evening.

Mrauk U’s stone temples construction goes back from the 15th to the 17th century: at this time it was the capital of the last kingdom of Arakan. 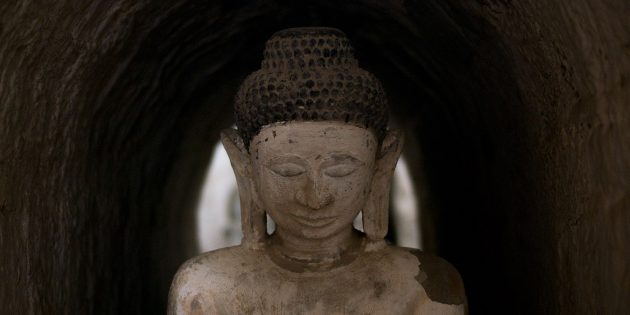 We stood amazed at the temples bell and fort shapes. Some have completely collapsed while others have been restored -burmese style, so with varying results… Inside, a spiral architecture houses hundreds of sculptures, bas-reliefs and statues, more or less preserved -and there again sometime spoiled by botched restoration.

Most of the temples are concentrated in a small valley surrounded by hills, some of which can be climbed to enjoy a nice view. 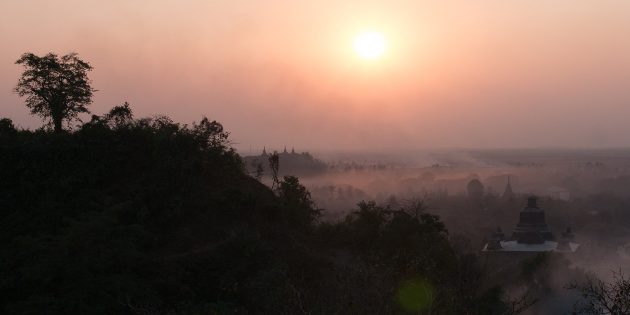 Continuing after Paya Andaw, a hill faces west, allowing you to observe the sun setting down on the temples. Chairs have been set up at the top, and steps have been cut to facilitate the ascent… Thus, you will be asked 500 kyats for the effort, and you might also find yourself surrounded with a dozen of photos amateurs! 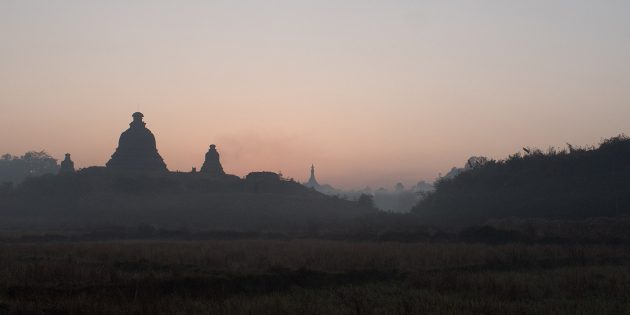 We had the most majestic view of the valley at dawn, from another hill facing south. Walking alone in the dark and silence hills, we came across a few humans that seemed to move like ghosts, while the temple’s massive silhouettes slowly emerged under a pink sky.

Just as we reached the summit, the first light shined from the opposite crest. The sun gradually bathed the temples-bells in a golden light, brightening the mist and wrapping the sanctuaries in mystery. 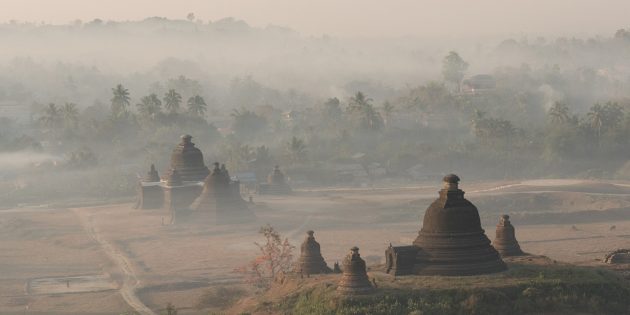 In short it was plain, raw poetry.

Around 7 AM we climbed down and wandered between the still desert temples, both of us revelling in a dreamy mood. A slow walk took us back to the market, full of activity in the lukewarm “golden hour” sunlight…

This morning was one of the most exquisite moments of our stay in Burma. 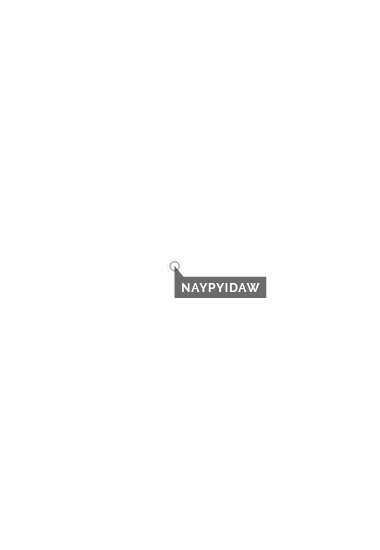