One compromise though: a dirt road was built in 2013, so an occasional car sometimes makes its way to this sleepy village on the banks of the Nam Oo, and the mobile network has been developed -so you’ll get a super slow internet which is better than nothing.

After reaching Niang Kiaw (3-4 hours from Luang Prabang, northern station for buses / southern station for minivans) you’ll finish the journey on a boat (1 hour, daily departure at 1PM from Niang Kiaw, probably more in the morning during high season).

Once a prosperous small port, Muang Ngoi was completely destroyed by the US bombing of the “secret war”.

At that time villagers took shelter in nearby caves, going out at night only to fetch provisions. As you venture into the darkness with a torch light you may still find some rusty tin cans, testimony to this tumultuous past. 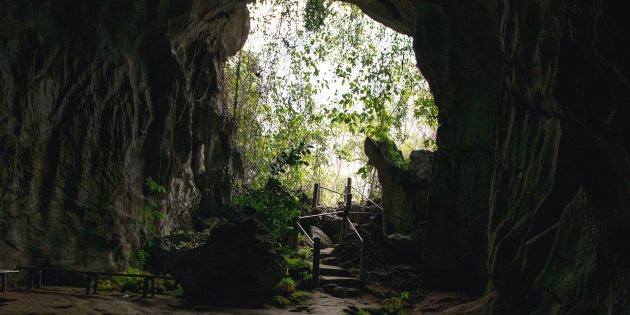 Beware of the wet rocks and muddy grounds! Even though I was going carefully, I managed to slip while climbing a small rock, loosing my lens’ cap in the process. Bao had to tap into his brief caving experience to explore the shore of the stream, one level lower, successfully but not without stress – mostly on me …

Some remains of the years of war and destruction are still sprinkled around Muang Ngoi itself: bomb casings rehabilitated as flower pots, or exposed for decoration purposes in front of restaurants.

House of the rice-ing sun

After the war, Nong Kiaw took over as the district center while devastated Muang Ngoi was slowly rebuilt. Its inhabitants made a smart bet on small but constant tourism: families have transformed all the houses along the river into dozens of backpackers guesthouses. 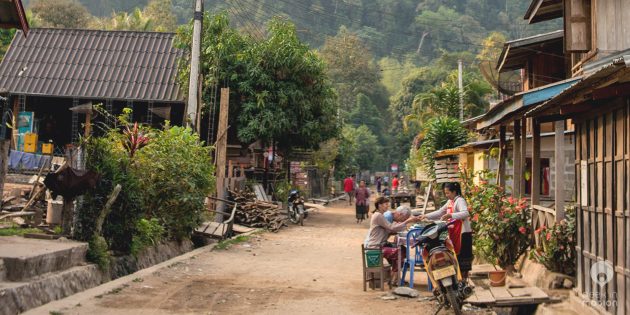 Most of the rooms here offer basic comfort but also feature hammocks and balconies, an ideal combination for daydreaming and losing all sense of time while contemplating the river’s lazy flow.

For everything else, there are no Mastercard

Tranquility has a price, and eating in Muang Ngoi costs more than in other busiest, more accessible places. Come with cash, there are no ATM -it may seem obvious but a reminder can’t hurt! 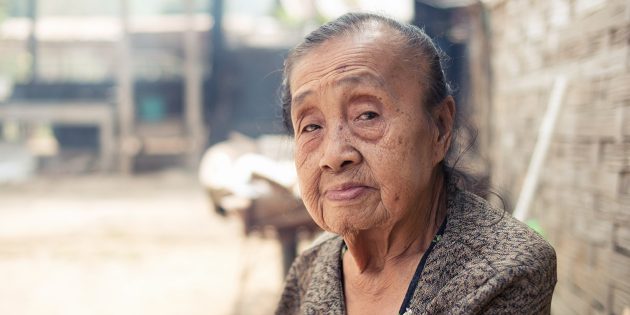 Immediately opposite the dock is the Phetdavanh pension, run by a Swedish guy who fell in love with a local 5 years ago and never left again. They offer a small all-you-can-eat buffet at an affordable price compared to the other restaurants in the village – we got a discount by sticking to one plate.

The food is better at Veranda’s place, which we made our HQ for meals. The rooms were also very good but push a bit further, almost at the end of the main street, and an other paradise awaits you at the Moon’s guesthouse. 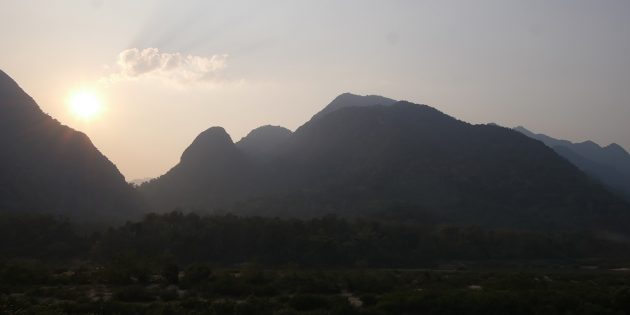 We negotiated a total of 200,000 kips for 3 nights in a superb double room -in a separated bungalow. Working under the awning of the common terrace and sipping a cold beer as the sun was going down behind the mountains made this place one of the nicest we stayed in Laos …

Also in the main street, some shops trade local handicraft products – a nice change after the standard made in Thailand baubles from, say, Luang Prabang’s night market.

Don’t miss the artistically cut out stencil papers – we gave in and bought two pieces, which we carried for a month before sending it back to France in my cousin’s bag when she left from Vietnam.

During our stay we had a chance to attend festivities organized in memory of four people who had died last year. Families came from all over the country, wearing their most beautiful clothes, and a merry industriousness took over of the whole village.

The day saw the preparation industrial quantities of food by the women, while the men were busy building bamboo and banana mini-houses, and decorating them with stunning decorations carved in bamboo pulp.

Late in the afternoon, the monks of the village presided over religious celebrations involving prayers, candies, and water throwing. After dark those were followed by splendid a capella songs by candlelight. Then the musicians took over to make the participants dance until after dawn – we bear witness, it’s true: they were still dancing at 7am when we hitted the road to the cave.

Why is mourning mainly celebrated in heavy and dark atmosphere in our western societies,. when so many people in the world know how to make it a party? We have returned the question from all angles, especially from religion, but without finding a satisfactory answer …

It was very difficult to leave Muang Ngoi, especially for returning to Luang Prabang where the hell bus to Hanoi awaited … But that’s a different story. 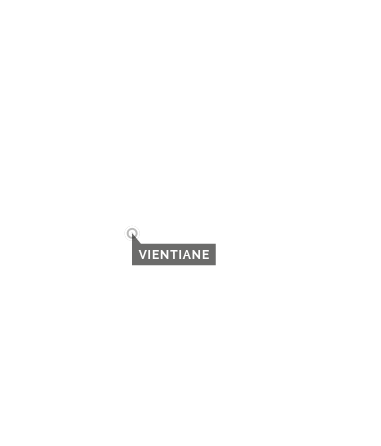